Yeah, you read that right. I waited in angst all day yesterday to get tricked by the middle child. Our eldest is on a Spring Break trip, otherwise I would have been doubly nervous. They are pretty sly children, especially when they're given a free pass like April Fool's Day.

The whole day went by with out any silly surprises. Last night I forgot all about it. And then came this morning....Because what good is an April Fools trick if you're expecting it? What better surprise than to wait until April 2nd? Who is prepared for that? Not me.

I woke up to find this on my refrigerator door. Pretty good, eh? All I could think was, "How in the world did he get that nail in there? That door isn't even magnetic!" 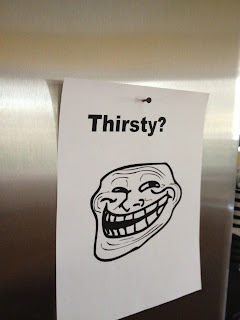 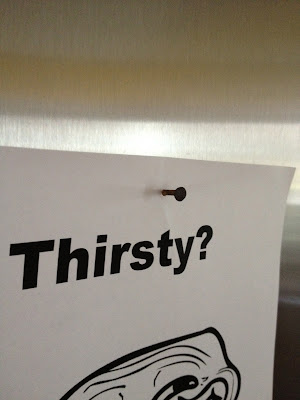 The thirsty question on the paper? Oh that was because my joyous son also included the youngest in his pranks, and changed the color of my milk and Oj. 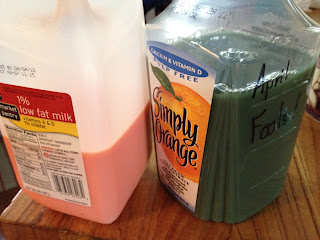 Now, there was no way on God's green earth that I was touching that aqua colored Orange Juice. And I hate milk. Plain milk that is. SO for a short minute I thought, "What if that milk is strawberry milk? What if as a trick to the dairy drink the youngest mixed in that strawberry syrup? He's ALWAYS asking to do that... Yup, that sounds just like him!"

I do not hate Strawberry milk at all; in fact, if milk isn't strawberry or chocolate, I don't touch it.

Being the thirsty, naive 41 year-old me, I drank the tiniest bit of that pink milk. It wasn't until that putrid liquid touched my tongue that I realized my kids could never be that kind. That milk was just milk, and I think it was spoiled. Ick.

The middle child met me in the kitchen with the devilish smile that he wears so well. All I could do was shrug my shoulders, pour the grossness down the sink and speak the words  only a mother who watched too much TV in the seventies would say, "Pretty Sneaky, Sis."

Yeah, I know. He's a boy. He's also a boy who's paying for new breakfast drinks. I will take him shopping with me tomorrow. And I may hold his hand the whole time. Nobody messes with mama :)