Today’s post is this month’s Funny Friday, a regular feature published on the last Friday of every month. Funny Friday is a collaborative project. Each month one of the participants submits a picture, then we all write 5 captions or thoughts inspired by that month’s picture. Links to the other bloggers’ posts are below, click on them and see what they’ve come up with. I hope we bring a smile to your face as you start your weekend. 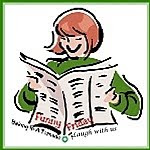 Here’s today’s picture. It was submitted by our host, Karen@ Baking In A Tornado 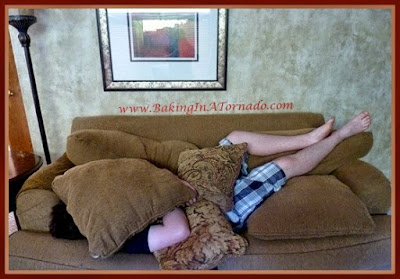 Here are my five captions:

1. Dave never seemed to win at 'Hide and Seek'.

2. After seeing his shadow, the young man burrowed deep for six more weeks of winter.

Hey there!  Welcome to the January Fly on the Wall Group Challenge. This month, 13 amazing bloggers and I are describing what it would be like if you were to take a peek inside our homes.... 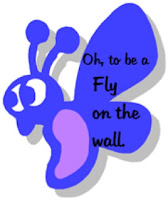 Have a "look" around mine, and then go visit the other blogger's pages. There's always something fun, sentimental, or better yet, embarrassing going on. It's like your house, only we're admitting to the craziness. You have our permission. Buzz on over!
Cast:
The man
Alex, the eldest (daughter, 21)
C., The middle (son, 16)
J., The youngest (son, 10)

Competition:
We have a somewhat competitive family. We all kind-of really love playing to win. Some families compete by playing sports or board games. My family competes over everything else.
And we "talk smack" right along with our winning. It's all in fun, I promise.

*Who can name the most crayon colors? (Me)
Me: "You call THAT periwinkle? Fool!"

*Name that Lifetime movie. (The man)
The man: "That one is called "Deadly Vows".  Someone kills someone else and slowly the characters will discover who it is even though we knew all along. How did you NOT see that coming? At least click over to the Hallmark Channel where I can have a challenge. Oh wait. 'A Bride for Christmas!' Too easy..."

*Football Picks. (The youngest)
J. to everyone: "You guys HAVE watched football before, right?"

*What time will C. get home on Friday night? (Tie)
Me: "Five minutes before curfew. I yelled last time."
The man: "I say five minutes after. He's been slacking."
The boy came home at curfew. On the dot. What fun is that?

Now I'm playing a game with the kids on my phone called "Trivia Crack." It's ridiculous how addictive and competitive it can get. (No clear winner yet.)
But the talk has already started:

C. to me: "Mom, call the fire department. You just got smoked."
Alex to C: "Do you have insurance? You just got wrecked."
C. to Alex. "How does it feel to be destroyed by your little brother?"
Alex to me: "Are you actually playing or just hitting random keys?"

Alex: "Why won't dad play 'Trivia Crack' with us? It's combining his two favorite things: Family time and electronics...Well, at least electronics."
C: "Probably because of the time he played "Words with Friends" with mom and created a 168 point  word. She didn't talk to him for a week."

The latest competition belongs to the man and me. We have these "FitBit" things. They count how many steps you take in a day. They're supposed to keep us active, but...

Me: "Hey, yoga doesn't work on this thing. It didn't even count!"
The man: "I've been saying that about yoga for years..."

Talking Smack. It's lovingly what we do.

The man and I play Black Jack with pennies (or whatever we have around) instead of chips. He's really good at it. Too good, I say. Last week we didn't have any pennies around. I walk over to the table and he's using "Good And Plenty" candies. I can't stand them. The man knows this.
Me: "WHY, for the love of of poker players everywhere, are you using that nasty stuff? Black licorice with a pretend candy coating tricks people. Those are lies, not candies in that purple box."
The man: "Well, last time we used Mike and Ike's and 'someone' ate them all before I even cut the deck."
It's true. 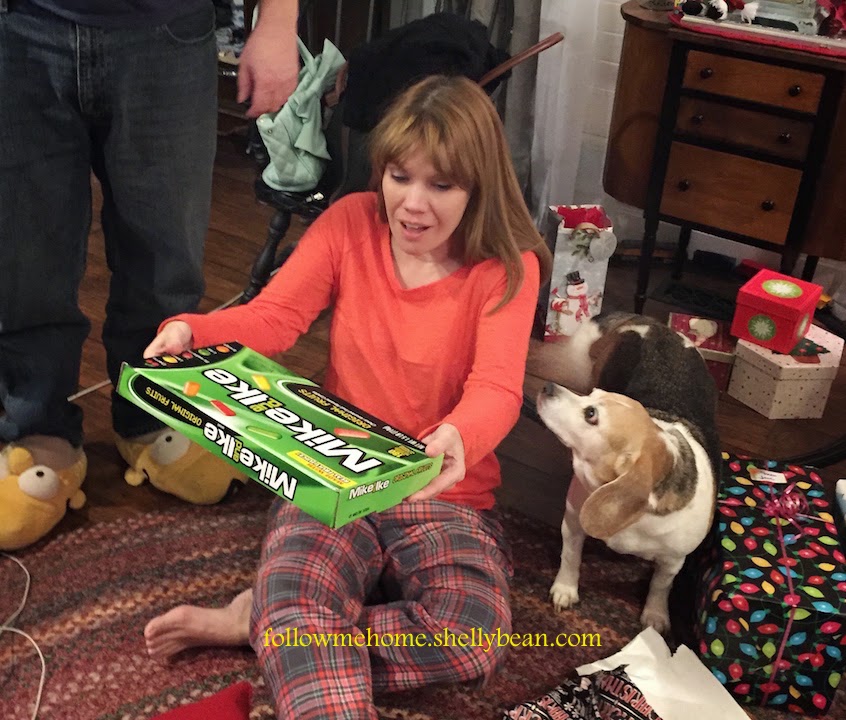 
Quote of the Month:

I talk with my 84 year-old Grandma from Michigan on the phone. She gets lonely, so we sometimes end up talking for hours. I'm on the winning side of this. She's a wise, loving woman. I always feel better after our talks.
I can tell that she's lonely, so I ask her if there are any cute men at her church. This was her response:
"What do I need a man for? Listen. I don't need ANYONE telling ME how to scramble my eggs."
Oh Grams...

Happy Friday, Friends!
-Michele
Fly on over and check out all of this month's participants:

Email ThisBlogThis!Share to TwitterShare to FacebookShare to Pinterest
Labels: blog challenge, Family, Fly on the wall, help me, smiles

Hello, friends!
A lot of kids went back to school this week.  I'm sure more than a few of them had to answer this question:
How did you spend your winter break?

Some children might have described their fabulous vacations. Some probably wrote about spending time with their families. Others still, could have written about being glued to their TV/computers/video games for a full fourteen days.

I was wondering how I could possibly describe my own Winter/Christmas break. Then it came to me. I'd use Potato Heads. Why, you ask? Well, on one hand it could be the after-effects of a NyQuil-induced coma. On the other hand... no, it's probably just that.

How I Spent My Winter Break by Shellybean 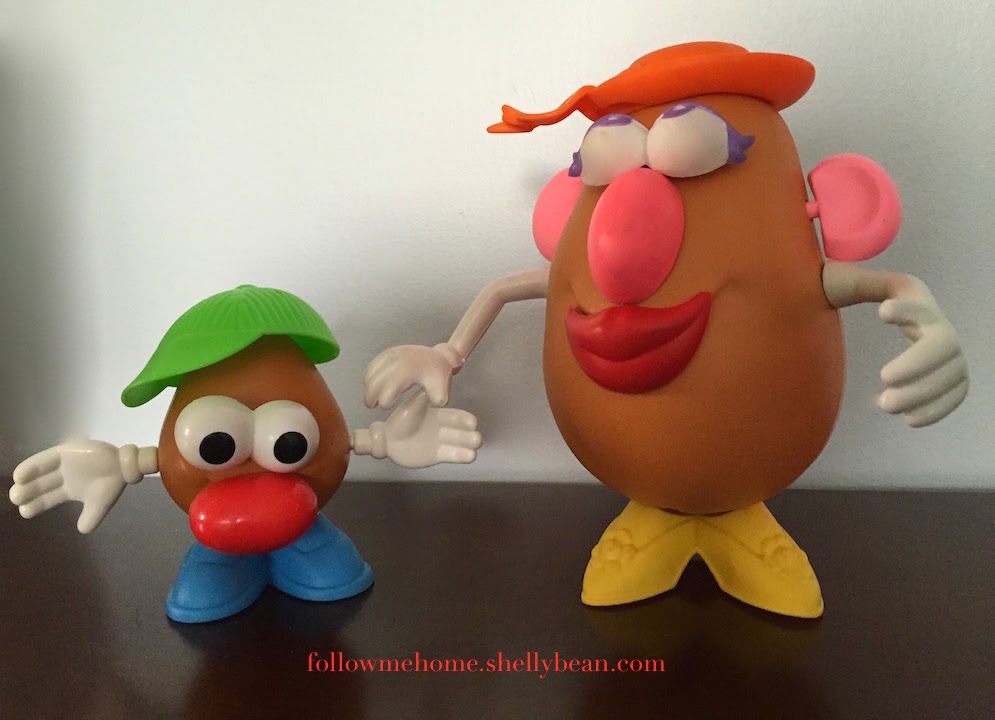 Dec 21. The kids had school on the Monday and Tuesday before Christmas. The youngest started getting sick on Sunday afternoon. Here is a pic of me rolling my eyes, thinking he was just trying to get out of his short school week. 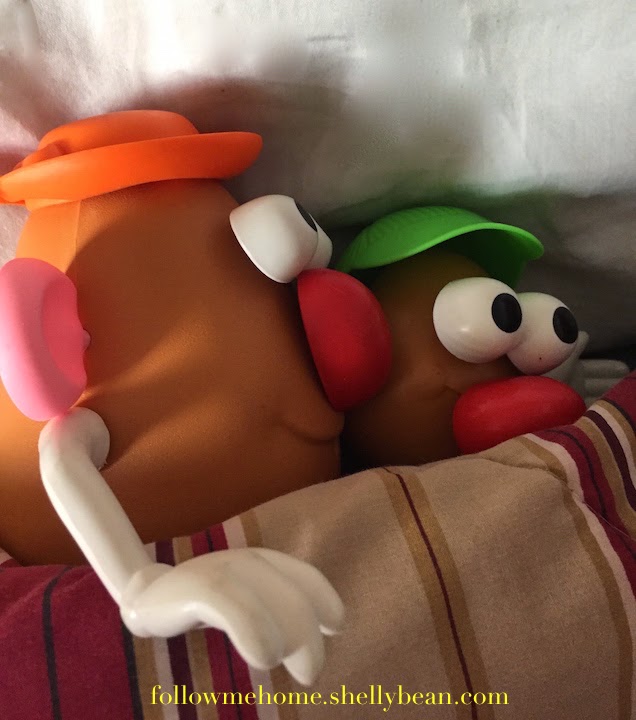 December 21-23. The youngest was not exaggerating. He quickly came down with a fever, started coughing and complained of aching all over. I don't care how old your kids get. When they're in pain and crying, you don't leave their side. The flu had hit and it hit with a vengeance. It took no longer than a day before I felt exactly the same symptoms. 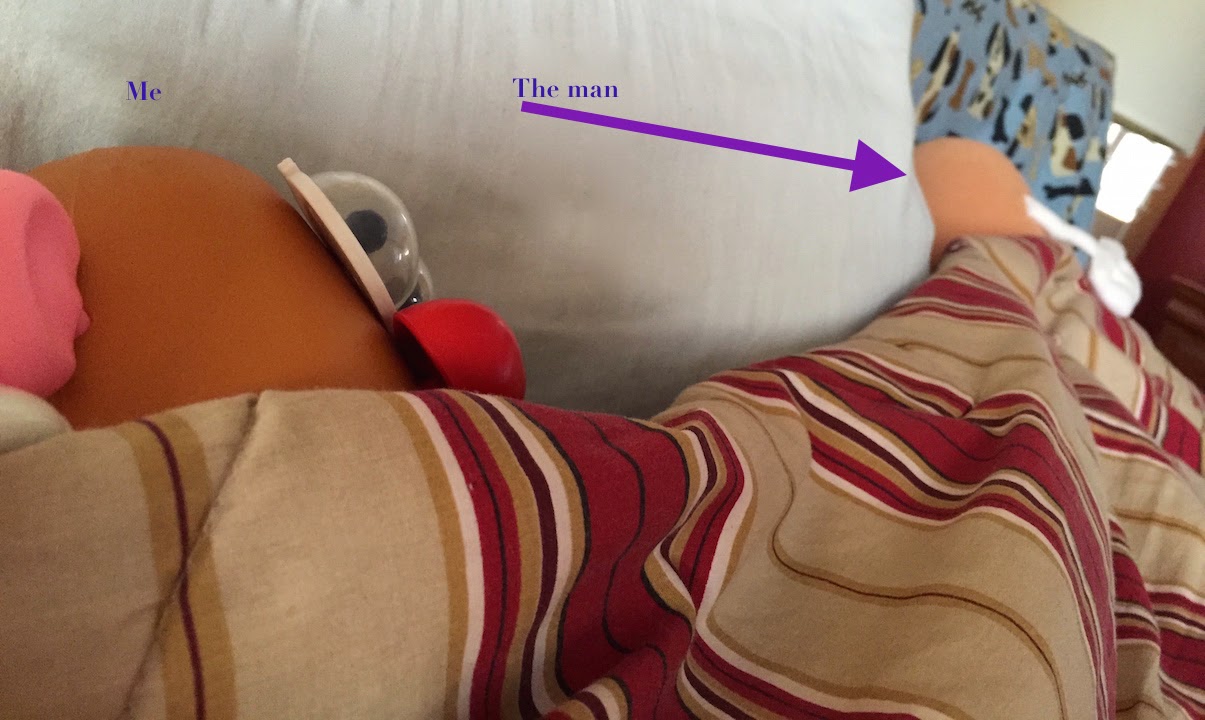 December 24-26 We had to cancel our family Christmas party. I was supposed to host at the house. There was no way that could possibly happen. The youngest was still feeling horrible and I just wanted to die. Notice the man keeping his space. I think he was hugging a can of Lysol the whole time. BTW, the man with the steel immune system was only sick one day out of vacation: Christmas Day. 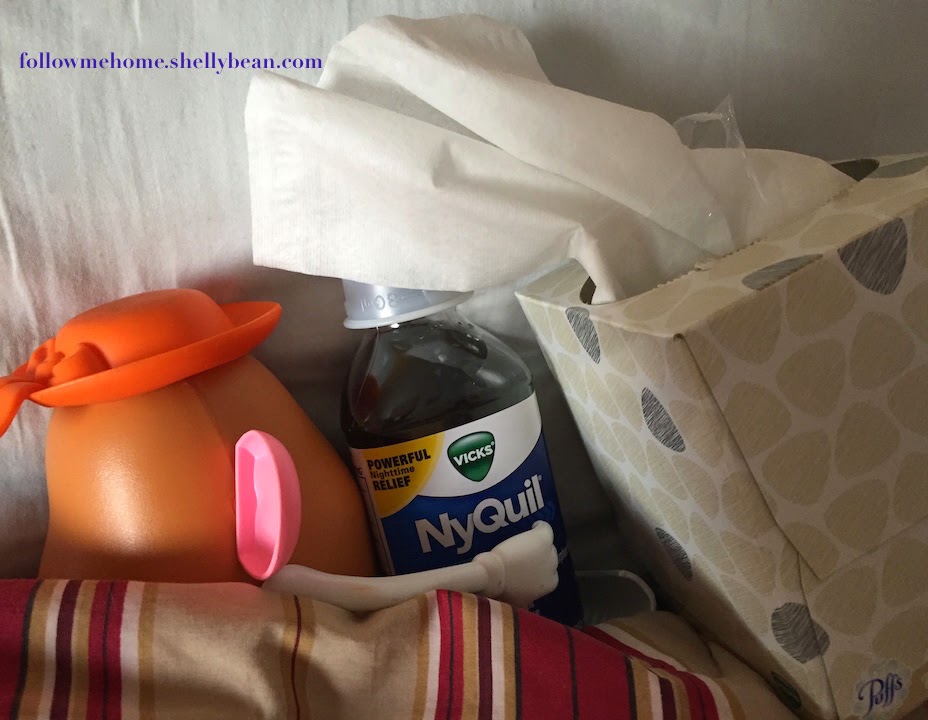 December 26-28 While the man held tight to his anti-bacterial wipes, I held on to this. Kleenex tissues with Vicks and NyQuil. You see, NyQuil doesn't care if you cough up a lung. It doesn't make you feel guilty if you're unable to answer the phone or check your computer. NyQuil doesn't judge. 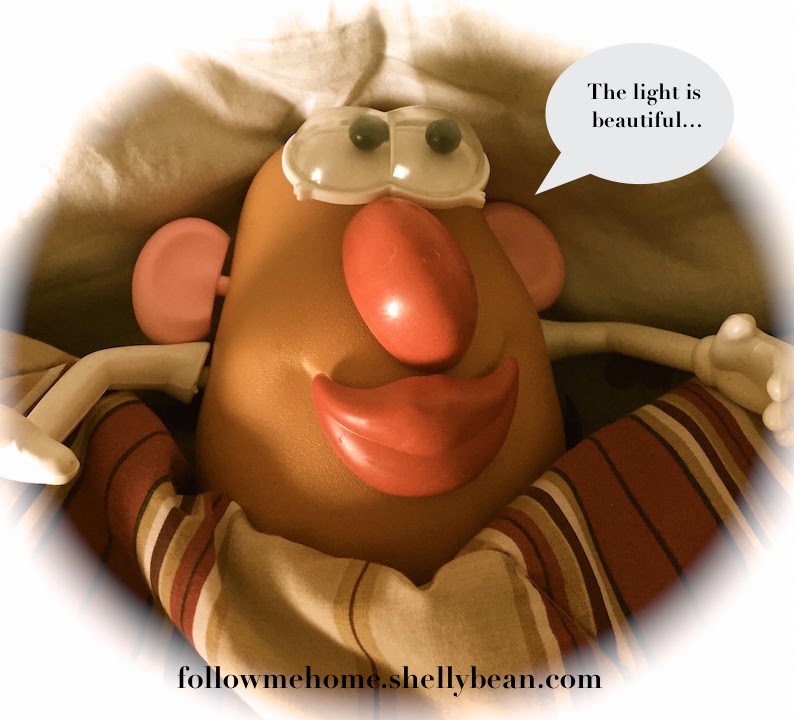 December 29-31. The 29th was my eldest's birthday. I made her a cake and we went to lunch. I don't clearly remember any of these events, but she assures me it was all good. I spent that night and the next trying to stay away from the light. The 31st was the man's birthday. We had made plans with our best friends to go a New Year's Eve party in the neighboring state. 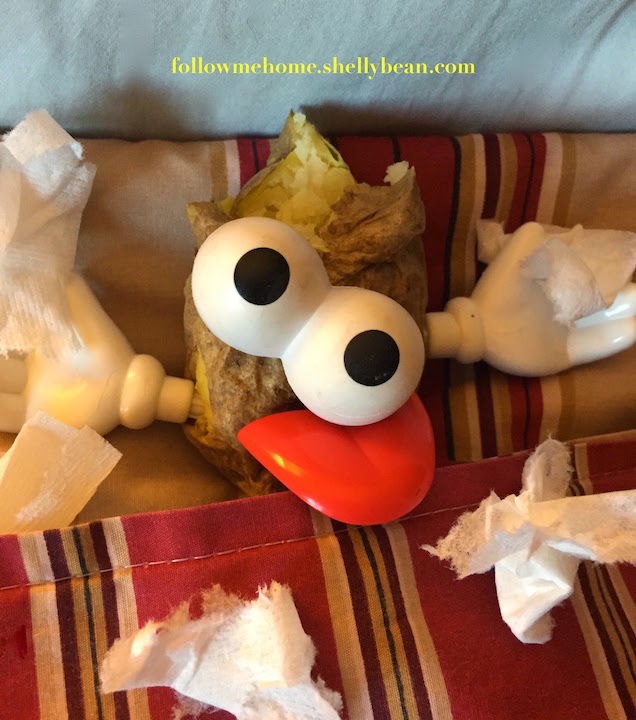 January 1. I made it until 7:30 p.m. I swear people, I may or may not have used a potato for this picture. That is exactly how I felt. 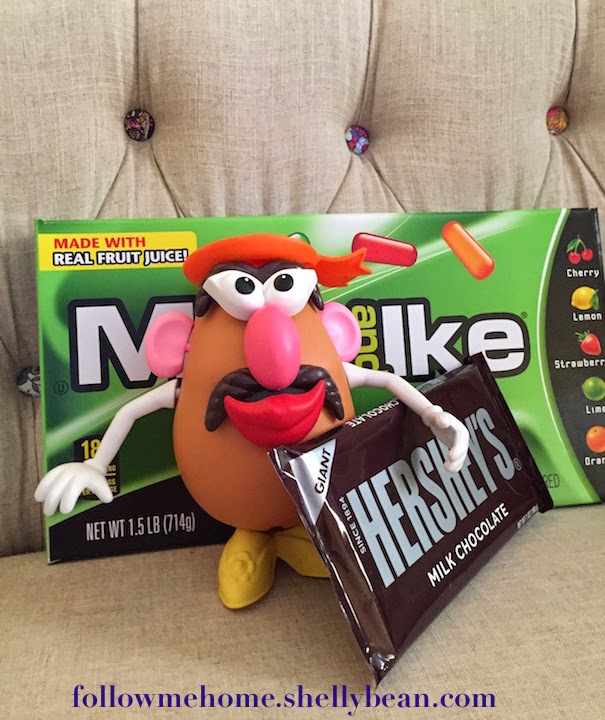 After a day or two, I was feeling more like myself. I could eat real food again and could stand up with out the world turning upside down. After some rest and a few hot showers I'm as good as new.
Yes, that's me up there, still in need of a good waxing. Okay, so I'm ALMOST as good as new...