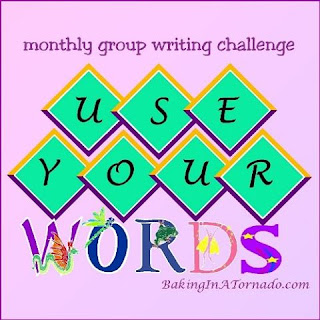 Hey-O friends!
Today's post is a writing challenge created by Karen@Baking In A Tornado. 10 participating bloggers picked 4 – 6 words for someone else to use in a post. All words must be used at least once. All posts will be different as each writer has received their own original set of words. No blogger knows who received their words or in what direction the writer will take them. Until today.

My words are:
wooden ~ cotton ~ covered ~ magnolia ~ green ~ cardinal
They were submitted by: the very sweet Minette @ https://www.southernbellecharm.com

I have always called my mother's mother, "Grams"
***
When I was young, one of my favorite things to do at my grandmother's house, was to go through her "button box." It was a round, wooden box not unlike the popcorn tins you get at Christmas time. It always sat on the floor next to Gram's favorite chair.

I'd sit down next to my grandmother's feet and listen as she'd string together magnificent stories from her chair. I'd quietly twist the lid on her button box and slowly pour the contents out; listening to the tiny clinks clanks of glass, metal, and plastic buttons as they piled upon one another onto the floor.

Gram's collection wasn't huge. It was made up of  buttons that she'd used or those that were passed down to her. After several visits to her home, I had memorized each button and could recall it just by closing my eyes and twisting it between my fingers. The long, cylindrical leather button used to be toggled to my uncle's boots. The oval button that was heavy and cold to the touch was her turquoise button set in silver. The large, smooth one with two holes that took up most of my little-kid palm was a forest green button that grandma said went to an old wool coat she wore before her children were born. Tens of tiny cotton-covered buttons had sharp shanks. Those belonged to Gram's own grandmother's boots. Each button felt different; each had it's history. My grandmother never minded sharing with me each button's story.

It's no surprise that I hold on to those memories and use them in my world today. I started saving buttons that came  as "extras" with my own clothing and then those of other family members. The buttons were held in a jewelry box until that became too small of a vessel. When I started sewing, I collected many more buttons; checking out their hues and textures.  Later, if I saw jars of old buttons in a vintage store, I'd pick them up and wonder, 'How many stories were in those jars?' I've even purchased them on eBay and asked for soon-to-be-thrown-away buttons from my friends. I've used them in my classroom and with my children to teach colors, patterns, and other classifications. I've sorted and divided them up myself.

My favorite thing is to put my hands in a large bowl of buttons, swirl them around until they fill the spaces between my fingers, slide over the tops of my hands and begin to reach my wrists. Then, I close my eyes and choose one button. I twirl it around with my fingers feeling for the familiar, and finally, try to guess which one I've picked. Over and over again. If I close my eyes in just the right way, listening only to the sounds of the buttons clashing with one another in that bowl, I can imagine myself sitting
on the floor; listening to one more story from my Grams.
***

Here's a game. Look at the buttons below and try to find:
1. A male cardinal
2. A wooden butterfly
3. A magnolia
4. A green skateboard
5. A cotton-covered button the same color as the cardinal.
6. A crab
7. A grey cat
8. A die 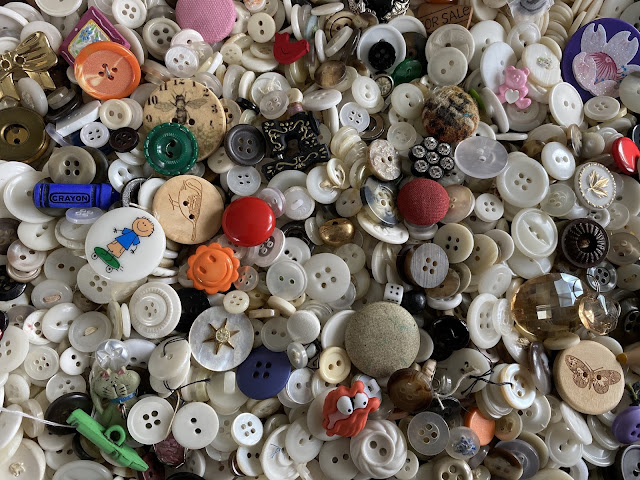 ***
Finally, here are a few photos of my "ahem," small button collection: 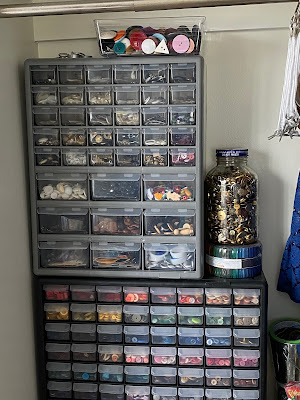 Color Coordinated, by size, by color, by metal, shanks, 2 holes, 4 holes.
Because: quarantine. 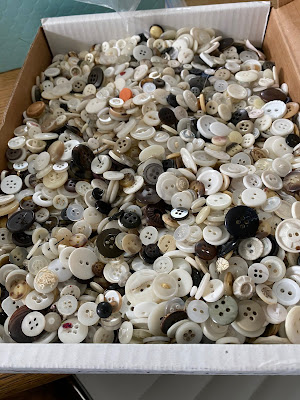 Extra buttons that live in this box 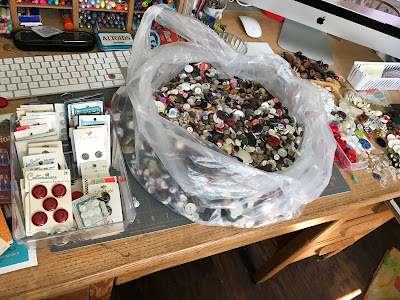 My husband: "Honey, can you fix a missing button on my shirt?"
Me: "Sorry, I don't think I have that one."

Check out the other cool kids participating this month:

Baking In A Tornado 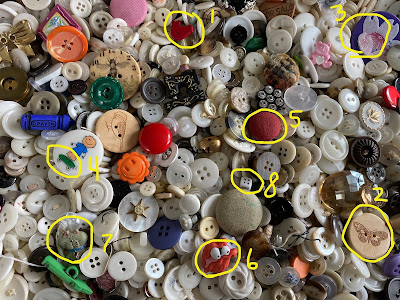