If you're a regular reader, you know that the Secret Subject Swap is a collaboration between various bloggers. We receive secret topics from a blogger in an e-mail and put our own spin on the subjects. The 11 blogs participating this time are listed at the end of this post. Go have a look and leave a comment. It will make my our day! :)

My “Secret Subject” is:


"You decide to clean out your neglected closet. While cleaning, you come across something that causes you to gasp in shock. What is it and why did it catch you off guard?"

It was submitted by: Marcia@ http://menopausalmother.blogspot.com/  I love this woman and her blog. Please be sure to check her out. Here we go...

I was cleaning out the back of my closet when I saw them. A new pair of shoes, waiting to be broken in. You'd think I could just pass over something so regular; something every closet holds. The shoes though, don't belong to anyone who lives in our home. They are waiting for their rightful owner to claim them. 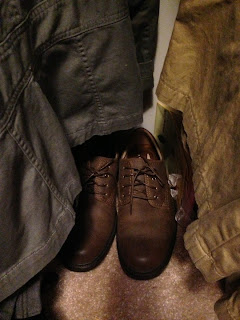 Years ago, we met a man sitting on the curb in front of our house. We thought he might be a solicitor or someone who was waiting for a ride. As we drew closer to him, we could tell that he was distressed and squinting fiercely at something in his hands. It was a pair of eye glasses. The lenses were so thick, you could see the magnification of them on the ground below. Tiny pebbles from the street looked like flat stones; the kind you might use for skipping in a lake. One of the arms of the glasses had come loose. My husband, seeing his frustration, invited the man inside. I thought he might resist, but the stranger walked through the door and softly introduced himself. He continued to fumble with the glasses while momentarily holding them up to find his way.

I offered up some cool lemonade while my husband handed over the repaired glasses. Grateful, the man placed the glasses back on his face, playing a bit with the frames so they fit squarely over his nose.  Rolling his eyes around to check the view from glasses, he began to grin. He looked up and truly saw us for the first time.

We must have spent hours talking over the dinner I demanded that he stay for. We learned that he was a writer and a world traveler. Between tiny bites of food, he would show us various photographs that he kept in a journal.  Alongside the many colorful pictures was his handwriting. The words were created with tiny, carefully written, capital letters. I thought the writing looked as if he was afraid the blank pages may run out.

The soft-voiced man spoke of the adventures he'd been on and those he had yet to take. When I asked him if he ever got lonely, he answered no. He told me how he loved to find himself in huge crowds of people. His technique was to be still while listening to the stories of others around him. This is how he found the inspiration for his writing. The photographs he explained, were taken by strangers he'd met on his journeys. Each picture represented a beautiful place with ordinary people surrounding him. He wasn't lonely at all. Where I might feel alone and frightened in a crowd, he was soaking in the whole experience.  He traveled lightly, carrying only a camera, his journal, a water bottle and the clothes on his back. There was something so simple about it. I have to admit, I was a little envious.

It was my husband who noticed the man's shoes. They were worn to the point that the toe was fraying and the soles were barely visible. I was touched at the humbleness of the man as he took a new pair of shoes offered up by my husband. They were a bit big, but they would more than do. I tried to offer the man new clothes, but he explained how he once saw a woman in similar clothes at a train station. He was adamant that they had a "moment" and that if she were to ever see him again, she might recognize him by his outfit. My husband and I, adorned our own matching sports jerseys smiled in admitting that his theory wasn't totally off base.

So he left us, nodding at the invitation to return when he was back in town again. Every now and again, the former stranger kept his promise and stopped by for an occasional meal packed with stories and photos of his latest journeys. He had so much to teach us with his words and experiences, we felt as if he was the one doing all the giving. After a while, my family would pick up an extra pair of shoes or an exact match of his long-sleeved t-shirts in anticipation of his next visit. He always accepted the gifts, appreciatively. We'd receive postcards he created from his photos. They came from every corner of the world showing our friend amongst strangers. Sometimes, there were so many people in his photographs, we'd find it hard to spot him. The children always thought of it as a game, trying to see which one of them could find our world-traveling friend first.

The stretches between visits became fewer and further between. During our last visit, our friend explained how he still hadn't found the love of his life and that he felt empty inside. He described his pain as feeling two-dimensional. What once felt wonderful was now becoming mundane. The blending in was not enough anymore. Listening and "hiding" in crowds now felt claustrophobic. He said there were moments when he wanted to throw his hands in the air and scream, "I'm here! Can't you see me? Doesn't anybody care? I am not invisible!"

I asked him to take a break. I told him he was welcome to stay with us. After a few days though, he was gone. The postcards still come. The writing is sloppier. The words are larger and the notes are shorter. My hope is for him to find peace; to find himself. I want him to feel like he can be equal with a crowd and be seen at the same time. I await the day he comes back with another story, or even better, with the love of his life.

Until then, a silly long-sleeved tee hangs with my husband's plaid shirts. The hat my daughter knitted for our adopted-family member sits with the winter coats... And the shoes. Those shoes wait for the day the doorbell rings and we welcome his worn body back into our home. 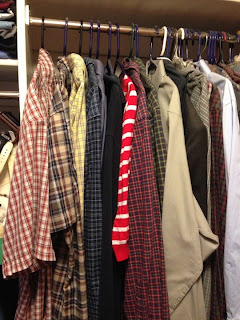 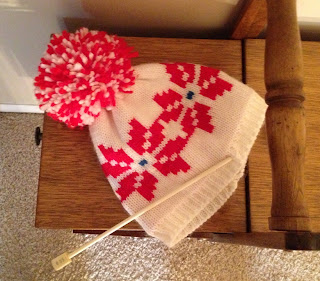 I still spend a lot nights thinking about him. I ask myself many questions.

What exactly brought that man to the front of OUR house so many years ago?

Is he safe? Is he healthy?

Would I recognize him among a crowd full of strangers?

Is he still wearing those same old clothes while waiting for his soul-mate?

Was he just a figment of my imagination?

Most of all, I just sit and wonder


Thanks once again to my girl, Marcia, for the topic.

If you are interested in joining us for the next Subject Swap, you can visit its creator, the wonderful Karen @ Baking in a Tornado. You can also read all about the swap by clicking on the SSS icon on the side of my blog.

Don't forget to check out this month's talented participants!