It's the beginning of April and time for the SSS! The flowers are blooming, the birds are out and I am opening every window and door to welcome it all in.

If you're a regular reader, you know that the Secret Subject Swap is a collaboration between various bloggers. We receive secret topics from a blogger in an e-mail and put our own spin on the subjects. The 12 blogs participating this time are listed at the end of this post. Go have a look and leave a comment. It will make my our day! :)

My Secret Subject this month was:  What is the best April Fool's trick that you've ever played?
It was submitted by: the wonderful Sarah @The Momisodes  She's on FB and Twitter too! Go to her page and hook yourself up :)

I'm pretty terrible at pulling pranks (that work). I've never been the "think six steps ahead of someone else" kind of girl. Unless the prankee is under the age of 7, I fail miserably. My middle son, however, tries each year to one-up himself in the pranking of his mother. Usually, on April 2, I get even by beating grounding him, but if I'm completely honest, I'm usually impressed with his creativity. Here is what I received this year:

Now. There are very few things in the world I hate. "Hate" is a strong word, I know. So I reserve it for the serious stuff, like mean women, spiders, and Good & Plenty (evil, black licorice candy). Right up there on the top of my most hated things?  CLOWNS. Hate, Hate, HATE them. Think of the one in "IT" by Stephen King. Circus Clowns. Paintings of Clowns. Clowns that come to birthday parties...Clowns that sell Happy Meals..They freak my freak, people. My family knows this.

A few months ago, we were in a thrift store and I found a pattern for clown costumes. It was old and I showed it to my husband with a shiver. 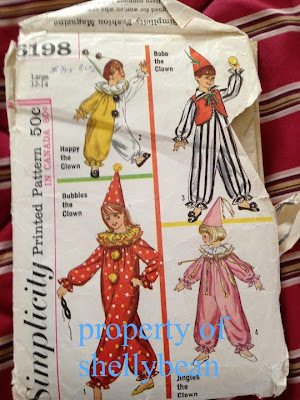 Why oh why would you do this to a child?

"Hey, I think my mom made that for me one year!" he said.
I spent 20 serious minutes contemplating our marriage.
I put the pattern back between a 1976 Caftan and a 1972 Shawl.

The next weekend, we were at another store that sold vintage patterns by the bag. I picked a few bags knowing that I would more than likely find a pattern or two I liked out of the lot. Nobody could beat the price of 2.99 for ten patterns.

Oh, you know what I'm going to say next. At the bottom of the gold mine was that same pattern! I screamed and told my son the story. All that mean child did was laugh. I picked the patterns I liked from the bag, put the others in our Salvation Army bin and threw that clown pattern away. I was NOT going to be responsible for making some other unstable terrified woman see that nonsense.

Fast forward to April 1. It was a Monday and the kids were back to school after a week off for Spring Break. I was using the bathroom when I looked up and saw that damn pattern taped to the shower door in front of me! I screamed my middle son's name out loud. Let me ask you this. If a woman screams in her bathroom all alone, can anyone hear her? Oh, just ask the neighbors. Or the elderly couple down the road.

That day, ALL over the house, I found these: 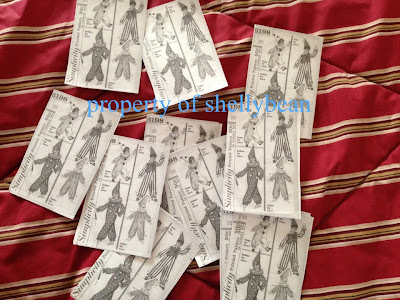 Smaller copies of the pattern. In my laptop, in the fridge, on my water bottle, on the phone...You get it. Each picture was numbered on the back. I knew that there were at least 18 because I found #18 taped to the remote. Of course I only found 13 of them. I turned around every corner looking for them, nervous of where the next ones would pop up. (The next prank? That kid skipped numbers so I would lose my mind looking for the rest...)

After giving up (once the youngest child got home from school and told me about the skipping-of-the-numbers), I went down stairs to gather fabrics for my next set of bags. I was still looking out of the corner of my eye for those little pictures of the pattern..I checked the door to my sewing studio, the ironing board and the cutting table. Nope, none there.


Then I saw it. I looked up realizing that someone had moved my dress form (Betty). The scream was louder and more piercing this time. 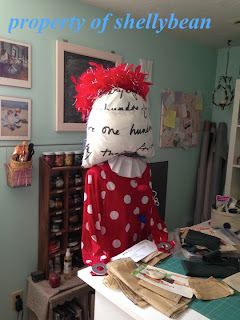 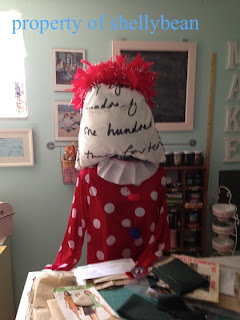 That pranking child of mine was going to be homeless.

Okay, no he wouldn't. But he would be clothes-less. I hid all of his clothes that day. In the bottom drawer sat the clown costume. Cheers to April 2nd in high school, my son.

So maybe I don't completely fail at pranks...


If you are interested in joining us for the next Subject Swap, you can visit its creator, the wonderful Karen @ Baking in a Tornado. You can also read all about the swap by clicking on the SSS icon on the side of my blog.


Don't forget to check out this month's talented participants!