Hello Friends!  How was your weekend? Eh, weekends are never long enough. When Sunday comes, I sit back and try to place where every bit of those two days went. Yet, every Sunday answers the same. "You've gotten enough done, Michele. No more, no less." This has to be enough.

This was the weekend my middle child and I had been waiting for. We've wanted a dog for a really long time. The problem has been on my end. I have terrible allergies. Our long look has been heartbreaking and just plain hard on the boy. We've wanted someone to love; someone who would complete the dynamics at our house. Let's face it, the ol' "follow me home" blog was also running a bit dry...New material for sure!

We loaded the family into the car and took a visit to our county animal shelter. Ugh. You would be missing your soul if you go in there and NOT want to take them all home. They bark and put on their show from their kennels. It's like a talent show; the prize being a forever home. I loved so many of the dogs :(  The five of us narrowed down our choice. I think we all chose Henry right away. The kids were in love. 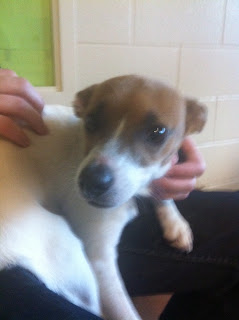 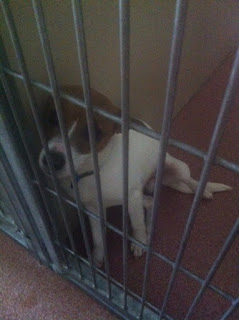 Our new puppy is a Chihuahua-mixed Jack Russel. We named him Henry and he's taken to the name quite well. In one day, he is already chasing balls and returning them. He will keep us very busy. He's cuddly, he's fast and he pees all over everything. Ack! For the most part, he's what the kids were looking for.

On the way out of the shelter, we passed Lila. Ugh. Lila is a beagle/bull dog mix. She is at least seven. She is getting grey and it is quite obvious that Lila was never asked to walk. This is the fattest, saddest little dog I've ever met. My daughter thinks she lived with an old, dying woman and they were sharing hard candies... I immediately wanted to bring her home. I could talk the kids into it, right?  The pound said that getting someone to take her would probably prove to be difficult. Two people had already cancelled on Lila. 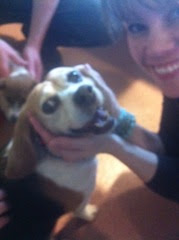 We put the kids in a room with rambunctious Henry. Then, we let the elder, Lila into the mix. They did their smelling routine and started to share which kid they wanted to jump on. Mark and I sat outside the room, watching all three of our kids laughing and smiling at the two dogs who were strangers just moments ago.
"We have to take them both, Mark. They'll love the house and the yard. (1/2 acre)
"Are you sure?" He asked, knowing how much work was ahead for us.
"We'll be saving two little lives. I need that. The kids need that and of course the animals need that.
24 hours later, we adopted those cute animals, put them in our car and let the windows down. This is what freedom feels like! I could feel Lila in my arms breathe out deeply, relaxing and realizing (?) she was safe.

We drove to Petco. They saw our "new" dogs by the way the kids were twirling around the leashes and running to the "cute stuff." What the workers were probably MORE excited about, was the man and me. We were the couple dragging along and apparently wearing hats that said, "We're Tired AND We're SUCKERS! Sell us anything! We just want to go home."

Dad: "The dogs are NOT to be on the furniture. Do not accept any of their poutiness. Be strong."
Me: "No matter what happens, I can not have any dogs in the sewing studio. I'm not kidding." 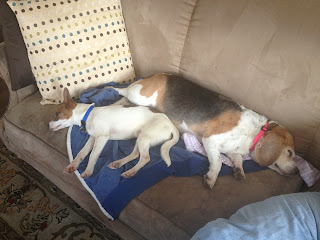 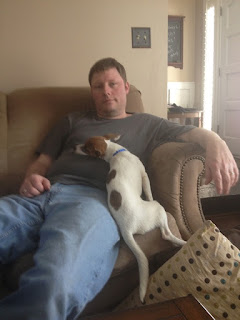 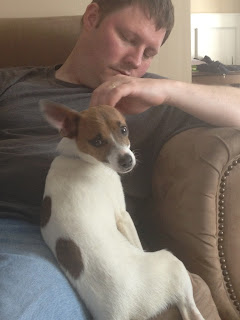 Put your foot down, Mr. Man. 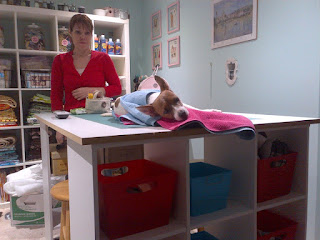 Henry resting on my cutting table... eh. I'm okay with it.

I believe my family is complete. For now.

What was your weekend like? How was the weather where you live? Pet owners- I will eventually get my life back, right?